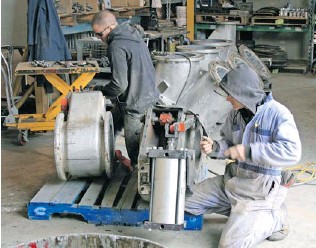 Unicast employees in Kelowna work on the company’s most popular product — the convertible diverter valve, which is used in the cement industry. The valve is easy to install and durable.

Opening a new office in a developing country can be a frustrating and headache-inducing endeavour for Canadian companies wanting to expand their business beyond familiar borders, but Gerry L’Esperance’s experience in the Philippines has been relatively pain- free.

L’Esperance is president, founder and majority shareholder of Unicast Inc., a Kelowna-based company that designs and builds parts for the cement, mining, aggregates and coal industries.

The small company — it employs 16 people at its Kelowna plant — has been shipping its parts to hundreds of cement plants and mines worldwide since L’Esperance and two partners opened shop in Edmonton 20 years ago. L’Esperance relocated the company to Kelowna 14 years ago because “this is where I want to retire.”

The company already has sales offices in Quebec, the U. S. and Mexico. Now it wants a permanent presence in Asia to tap into the rapidly growing cement industry in the Philippines and Southeast Asia. L’Esperance is also looking at the region’s many quarries and mines as future potential customers.

In February, Unicast opened a sales office in Manila that will be staffed by two engineers whose main customers will be cement plant owners keen to reduce operation costs. Plants lose large amounts of money when they have to shut down because of worn or broken parts. A local sales rep and distribution centre can potentially save customers thousands of dollars per hour, according to L’Esperance.

Machinery and equipment exports totalled just over $ 4 million in 2013.

Unicast is also planning to open a warehouse in the Philippines sometime in 2015 and stock it with its most popular item — the quick- to- install and durable convertible diverter valve — as well as crusher hammers used in the cement industry. The challenge, however, is to find out what is used in the market — most of Unicast’s products are custom-built and need to be pre- sold.

While some of Unicast’s products are made in China, the diverter valve is entirely produced in Kelowna. “International customers are thrilled with the wear life they are getting” with the valves, L’Esperance said, noting that the valve can be installed by one engineer in an hour.

A regional office in Asia allows Unicast to improve delivery times and offer multi-language support and consultation for regional customers, said L’Esperance, who’s been working in the foundry industry since the late 1960s.

Choosing the Philippines for its Asian base came naturally as Unicast has been selling limited products there through its partners for 10 years. It’s also centrally located with more than 40 cement plants in the trading area.

Though the World Bank ranks the Philippines 108th out of 183 countries for ease of doing business, L’Esperance says it’s been fairly smooth sailing for Unicast.

“Business registration has been simple and I don’t foresee any major obstacles in this area,” he noted. “And import taxes and processes are similar to Canada.”

L’Esperance travelled to Manila in early March to visit the company’s new sales office, scout out a possible location for a Unicast warehouse and meet with potential new customers in the cement and gold mine industry. The visit exceeded his expectations.

“It appears we are the only cast- wear parts supplier that can provide product application design and technical support in this area,” L’Esperance wrote in an email from Manila. “It normally takes a few meetings with an end user to obtain an opportunity to quote. This week we have received many requests with promises to try our products. I am very pleased with our progress in such a short time.”

Due to normal production lead times, it will take L’Esperance at least six more months to determine the direction of the company’s next phase in the Philippines, but he said there are many warehouse locations available.

At this point, he doesn’t want to estimate potential revenue from Unicast’s Manila office, but he’s feeling positive.

“It is too early to predict growth percentage, but I am very optimistic it will be worth our efforts,” he wrote before jetting off from Manila to China.