As Tough as TiC 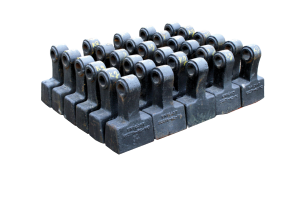 Most high-impact applications in the mining and cement industries show that there is not only wear from impact but also high sliding wear.

Traditional solutions tend to solve one problem or the other but not both. On the one hand, a high chrome weld on a cast manganese hammer performs well in high sliding situations, but high chrome can break under high impact. On the other hand, manganese thrives in high impact situations but quickly fails in high sliding applications if it does not have an opportunity to work-harden. Titanium carbide (TiC) inserts in a manganese alloy allow the manganese to work-harden before extensive wear occurs and, as such, solve the issue of wear due to both high sliding and high impact.

During the casting process, TiC columns are held vertically with a proprietary system in the sand mould. The columns are positioned for maximum surface coverage in the hammer’s high-wear zone. Manganese or wear alloy is poured into the mould and then the hammer undergoes a special hardening procedure. The TiC columns provide structural strength to the hammer while the manganese or wear alloy gives the hammer the flexibility to handle the impact. Both alloys work together to lengthen the overall wear life of the wear part.

Cement plants are quickly embracing titanium carbide wear parts, a product line that is unique to the Canada-based company. One of our main goals is to work with cement plants around the world to reduce the wear on their parts,” highlights Mr. Kirschner.

Unicast has already seen success with the TiC hammers in cement plants throughout North America. Available in two base alloys, manganese and the company’s proprietary wear alloy and in lengths of 40, 60 and 80mm, the hammers are delivering durability and strength.

A cement plant in Apple Valley, California, replaced OEM hammers with Unicast WR-TiC hammers for an increase in wear life of 7.5 times. The original OEM hammers crushed 60,000t of limestone before breaking. The WR-TiC 80mm hammers have crushed 450,000t of material to date. Previously the plant tested hammers with ceramic inserts and were disappointed with the results. They also tested high-chrome hammers which broke in their machine within a matter of days. Unicast’s WR-TiC hammers outperformed all others. The company is satisfied with the results, such as less downtime and longer run times, and has applied this technology to other applications, such as door liners.

A cement works in Laramie, Wyoming, installed Unicast clinker hammers with 40mm TiC inserts, with the expectation that they would last until its shutdown in April 2015. The hammers showed no sign of pin-hole stretch, an issue the cement producer experienced with its previously-installed dual alloy hammers. After five months in use, the hammers still look like new, exceeding customer expectations.

A cement plant in Stockerton, Pennsylvania, installed the Unicast Titanium Carbide Blow Bars for an increase of 266 per cent in wear life over its previously-installed blow bars. The cement plant staff are highly satisfied with the savings in both cost and labour. The run time on their previously-installed manganese blow bars with high chrome ribbon welding in the 526 Impactor was three months. In addition to this short wear life, the blow bars required 4-6h of build-up and hard surface welding to the high impact zone every weekend.

The hammers showed no sign of pin-hole stretch, an issue the cement producer experienced with its previously-installed dual alloy hammers. After five months in use, the hammers still look like new, exceeding customer expectations.

Since then, the plant has been receiving seven months of wear. TiC blow bars have eliminated the costs of weekend welding, a cost savings of over double the cost of new TiC blow bars.

A cement plant in Victorville, California, replaced its OEM hammers with Unicast’s manganese base secondary hammers with 40mm carbides. Unicast changed the length of the carbides twice to best suit this plant’s specific application, and this customer now receives 3.55 times the wear life over the previously-installed OEM hammers. The plant’s run time has increased from 458h to just over 1620h per set of hammers. Plant personnel are extremely pleased with the results and are now looking to use Unicast TiC wear parts in their clinker crusher hammers.

Quickly becoming popular in cement plants around the world, TiC wear parts are the Unicast’s fastest-growing product line. “Customers love our TiC hammers. One customer in Exshaw, Alberta, told me that they will not install another brand because of the wear life they are getting from the Unicast clinker hammers,” notes Mr. Kirschner. The savings in wear life, maintenance, and increased run time contribute to a better bottom line for cement plants, he concludes.